Great place to start a career or business!

Did you know that California, Md made Forbes list of best small places for business and career! Yes, in 2018 Forbes made a listing to show what areas in the country are great places to move too!

More than half of the world’s population lives in cities, and urban life is taking a toll on our health and well-being.

By 2050, experts estimate that as much as 70% of humanity will reside in cities. And the traffic, the noise, the pollution — it all adds up.

Strategically, this list gives an overview of areas in the country that you can be able to start a business and experience some of the business potential found in larger metropolitan areas, without the stress of a major city. 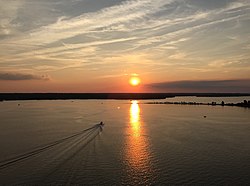 California-Lexington Park is a newly-defined Metropolitan Statistical Area that is made up of St. Mary’s County in Southern Maryland. St. Mary’s County was a farming and fishing community centered around the Chesapeake Bay, but has undergone a decades-long transition where employment centers around St. Mary’s College of Maryland and defense contractors tied to the county’s military bases with the largest being Patuxent River Naval Air Station. There are also an increasing number of long-distance commuters to Washington, D.C.

Saint Mary’s County (often abbreviated as St. Mary’s County), established in 1637, is a county located in the U.S. state of Maryland. As of the 2010 census, the population was 105,151 with it’s county seat located in  Leonardtown. The name of the county is in honor of The Blessed Virgin Mary, the mother of Jesus as told in the Bible.

St. Mary’s County comprises the California–Lexington Park, Maryland Metropolitan Statistical Area, which also is included in the Washington-Baltimore-Arlington, DC-MD-VA–WV–PA Combined Statistical Area. Saint Mary County  is located in the Southern Maryland region. The county was the home to the first Maryland Colony, and the first capitol of the Colony of Maryland. Settled by English Catholics, it is considered to be the birthplace of religious freedom in North America, at a time when the British colonies were settled primarily by Protestants.

The county is home to the Patuxent River Naval Air Station and St. Mary’s College of Maryland.

Traditionally, St. Mary’s County has been known for its unique and historic culture of Chesapeake Bay tidewater farming, fishing, and crabbing communities. But with the advent of the military bases, growth of an extensive defense contractor presence, and the growth of St. Mary’s College of Maryland, as well as increasing numbers of long-distance Washington, D.C. commuters, it has been undergoing a decades-long transformation which has seen the county’s population double since 1970.

Thinking of making a move?